How To Organize A Flash Mob 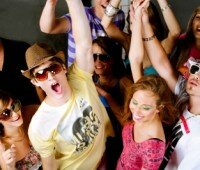 Practically everyone knows what a flash mob is. Simply put, a flash mob is a seemingly spontaneous creative act that is carried out by a group. The great thing about flash mobs are how versatile they are. You can have tons and tons of people, or a very small crowd that performs the actions everyone has agreed upon.

And when it comes to what you can do with a flash mob, the possibilities are just about endless. If you are looking for a way to generate fantastic positive publicity for your event, you will definitely want to explore the potential of a flash mob.

Before you ever get started on exploring the potential of flash mobs, do a little research first. Check out some of the most famous examples of flash mobs. Some of the best flash mobs of all time include Frozen Grand Central, Stockholm Michael Jackson Dance, Singles Ladies at London Piccadilly Circus, the Do-Re-Mi Belgian commercial, the Seattle Glee flash mob, and many, many more. All of these are worth checking out, in order to see examples of flash mobs that were organized and executed correctly.

Once you are ready to put together your own flash mob for your event, there are a few things you are going to want to do.

In the first place, you are going to want to have a clear-cut goal in place. Know why you are assembling the flash mob in the first place. The next step from that point is to start looking for ideas. Obviously, it is a good idea to look at suggestions that are connected in some way to your event. If this proves to be difficult, start looking at the broadest ideas possible. Large performances of popular songs is a good possibility. Above all else, you want your event to contain both humor and strong entertainment value.

In terms of building your flash mob, you want to make things as attractive to interested parties as you possibly can. You want a flash mob event that is not going to be disruptive to the point of detrimental. You want something that is silly, fairly easy to do, and with the potential to promote both yourself and the individuals engaging in the flash mob. Make sure you know the area in which the performance will take place. Work out all of the logistics ahead of time.

And, of course, have the performance ready to go out on social media.

Tweets by @EventsUncovered
Skip to toolbar