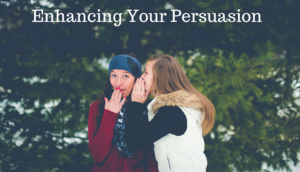 As human beings, we are social creatures. Whether it’s through body language, sound, or sight, in one way or another, we’re communicating. Sometimes you can just read what the other person is thinking, and in the event industry, an industry where being socially aware and engaging, it’s absolutely critical that you know how to persuade. Part of being persuasive is simply being able to communicate effectively. There is no secret trick to it, but a lot of people can make it seem a lot more complicated than it really is. However, by the end of this, you should’ve been able to pick up on a few more tips that you would’ve otherwise overlooked.

When it comes to being persuasive, you have to at least know a little bit about the person whom you’re communicating with. People don’t like being talked down to, and some people especially despise those that are trying to tell them what’s best for their own good. Rather than being the dominant one in the conversation, try and ease back a little bit. By listening, you can pick up on clues and get some better insight that might aid you in knowing what to say next.

Read the Other Person’s Body Language

When it comes to people, there are tricks to getting past the barriers they put up in terms of communication. In the events industry, if you’re trying to make a pitch to a client, a vital part of this is watching their body language. You’ll need to be very perceptive to this because otherwise, you’re going to have a lot of trouble getting your point across, and if you can’t get your point across, you’re going to be lost in the long run.

Say What you Mean

When you say something to a client, you need to say it with your entire body. Say it as if you truly believe it. A client or prospective lead can see a fake talker a mile away, so if you’re going to go off of a script, you might as well quit before you even try. Let your words flow naturally, and make sure your posture is confident and assured. Ultimately, being persuasive is really just connecting with the other person in such a way that they not only feel comfortable with you, but they really like what you have to say. Doing all of this will do so much for making you a much more persuasive person.

One Response to Enhancing Your Persuasion