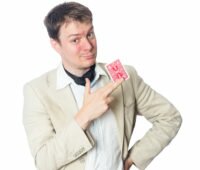 Owen Lean, The Bachelor of Magic, has been doing all of this ever since he graduated in 2006 with the world’s first degree in street magic. When Owen received his degree he made the front page of the Irish Times, and several other national newspapers. A year later his house burned down and he lost everything he owned, but he refused to let that hold him back. Ever since he has travelled the planet, performing his unique miracles, and taking away peoples fears. From just one person in a teaching environment, to thousands of people at a festival at event. Owen turns awkwardness into confidence with magic. Owen has shared his knowledge on how to use magic at events, icebreakers, conversation sparkers and making the impossible possible.


To get in touch with Owen, go to www.owenlean.com