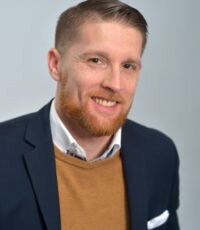 Caleb Parker is an American entrepreneur in London. He’s a founder, director, startup advisor, investor and tv show host, with a keen focus on innovation and technology, and interests in the MICE market, sharing economy, fitness & nutrition and future of work. Caleb has been a guest lecturer on topics such as entrepreneurship, the sharing economy and the future of work at academic institutions including Georgetown University, George Mason University, and London School of Economics, as well as numerous trade conferences. He currently serves as: Show Host of The Future in 15, Co-Founder & CEO for Bold, Board Member for Select Event Solutions, Tech Chair for HBAA and Advisor to multiple startups. Caleb’s passion for helping people improve their lives and succeed in today’s economy has grown over the past seven years while helping people learn about meeting rooms on-demand and workspace-as-a-service. He says we are in a ‘new economy‘ where technology has afforded us the freedom to work wherever we want, which is good, but as a result we rely too much on digital communication. He believes relationships are the key to business success, and in-person communication is still required. He spreads his “new economy” message at numerous conferences, social media, panel discussions, podcasts and various blogs. He is the former CEO of MeetingRooms.com(2013-2016), the world’s largest online marketplace to search, book and pay instantly for small meeting rooms in over 130 countries. Prior to joining MeetingRooms.com, Caleb co-founded a technology startup in 2012 to create the first global distribution system for on-demand office & meeting space. Earlier in his career, Caleb was named one of Savannah’s “40 under 40” business leaders” in 2006. Caleb has shared his knowledge on booking spaces by the hour, 3 types of people who might need office spaces, spaces on demand, creativity and location.


To get in touch with Caleb, go to @Caleb_Parker