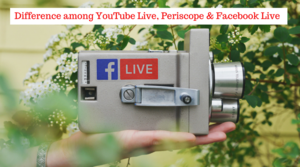 YouTube is the largest video hosting and broadcasting platform in the world. Facebook is the largest social network of the world. Periscope is a live video streaming app from Twitter which can be used on Android and iOS devices. Amid an increasing demand for live streaming of videos, you may wonder which platform is the most befitting given your needs. All three are popular and are used by millions of people. Here is a comprehensive assessment of YouTube Live, Periscope and Facebook Live.

What do you use? What’s your preference? Why?